I must admit that when I first listened to David Bowie's Blackstar, the title track of his final album, it confused me. I couldn't quite get it.

A strange, hybrid techno beat overlaid with near-religious, repetitive lamentation. Nevertheless at its heart there was something quite beautiful, which grew by the third or fourth listen.

Today I watched the music video for the first time since David Bowie's passing. And with that knowledge, the entire context of both song and visuals has changed completely. It is now known that Bowie had been battling with cancer very privately for months, and knew full well that Blackstar would be his final production; his swan song.

The video for Blackstar is not easy viewing. It's full of symbolism and I'm not clever enough to figure it all out. But here is a dead man singing about his own death. About the blindness of dying and what is to follow. About religious fervour and our acceptance and expectations of it. And as Major Tom, long dead and decayed, sprawls in his spacesuit on some faraway alien landscape, it seems that for David Bowie at least, the circle is complete...

The song, as it shifts in pace and mood is quite jarring. I doubt it was meant to be easy listening. And I'm sure as the years go by it will come to be seen as an enigmatic epitaph to David Bowie's spectacular, indeed stellar career.

Some might say that to know when you are going to die is a horrible curse. But others might consider that it actually gives perspective; provides a chance to put things straight, to make preparation...

I would like to think that in writing Blackstar, Bowie was preparing...

Two of my favourite Sonic Maestros under one roof...

And that's all I have to say about that.

As is often the case with a classical heroic journey, what you get out of the quest is often what you bring to it.

Toa Fraser's The Dead Lands is a slow burn, a classic hero's tale sprinkled with action and violence. This is a journey that takes its time, stopping along the way to explore issues of family, honour, and ancestral duty within the context of a young man thrust into circumstances that must make him a man.

The film's archetypes are made overtly manifest, from the monster in the dark woods, the big bad guy making for a fine protagonist, and of course our young hero making his way through a world for which he is barely able to cope.

Yet the power of this film lies not in what it shares with other films, but its unique quality and flavour. While not drawn from an explicitly Maori tradition, the film nonetheless provides what feels to be a genuine, heartfelt look into the traditions of Native New Zealand culture. 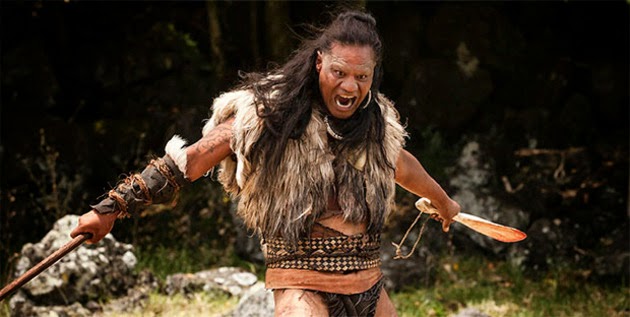 The action elements - and there are plenty - are constructed to further emphasise these elements. Traditional weaponry, connections to the spirit world, and the use of hallucinogens to help the voyage to that world, are also employed as both echoes of traditional experiences and of ancient tales from numerous cultures.

Director Fraser mixes this sense of spiritualism with some astonishing and lush cinematography, as well as more than a few visual flourishes for the action sequences borrowed from classic martial arts films. The ensemble cast, led by James Rolleston and Lawrence Makoare, inject the film with both a seriousness and liveliness that is compelling.

The film brings the physicality of the Maori warriors to international audiences; as well as, and even more crucially, its language to a wider world. It may be an aspect too easily dismissed, but the decision to have the film presented with subtitles, allowing the performers to speak in their Native tongue, is a critical aspect of the film's success. Given that Maori battle culture is entwined with its language, the chants and battle cries very much part of its dance-like form of martial arts, the producers were wise to never push the film to become more mainstream, as it would have diluted much of its impact.

The visit to The Dead Lands is both epic and intimate.

How would you spend your Last Day on Earth?

This is the question posed by These Final Hours. It's a question that's been asked many times before. Celluloid has placed the Earth and the Human Race in many apocalyptic scenarios, from alien invasions to climatic catastrophes, to viral pandemics. Most of these have been huge, effects-driven blockbusters - and although the Apocalypse told on such a grand-scale certainly draws the crowds - it's the smaller, more intimate stories that leave a lasting mental impression, and lead you to really ponder the question, "What If?" 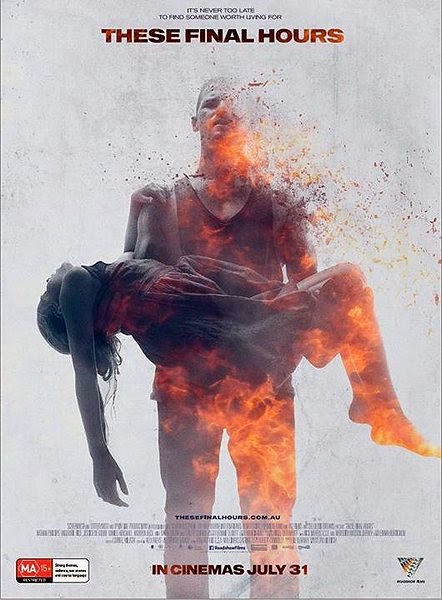 Set in Perth, Australia, we quickly learn that this is the final day on Earth and that the Western Australian city only has 12 hours left before the inevitable downfall that has already taken down Europe, Canada and a large chunk of the rest of the world.

We meet the self-absorbed James (a believable and gritty performance by Nathan Phillips) as he is rushing off to his mate’s massive house party to drink his sorrows away and forget about the looming end of life as we know it. It’s a dark, foreboding urban landscape that James traverses - as society falls apart at the seams, and the city's inhabitants cope with the impending disaster in their own, often disturbing and macabre ways.

Unforeseen events then place James in situations where he is forced to choose between his own self-destructive resolution and the last shreds of humanity that are buried away, deep within him.

What is most disturbing about this movie, and the reason why it works so well, is that the scenarios presented are entirely plausible. We all like to think of ourselves as decent, civilized human beings. But when presented with just 12 hours to live; and a fate we simply cannot escape - would it be so difficult to slip from the shackles of humanity and rapidly descend into a much darker state of consciousness? 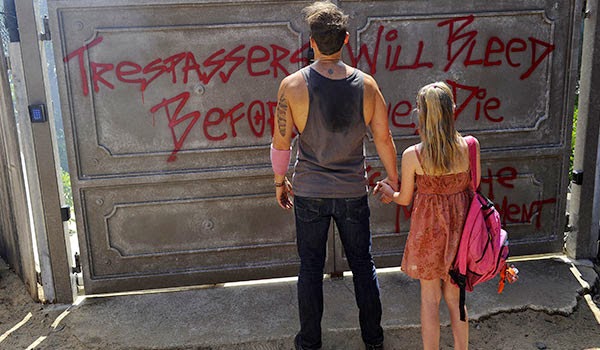 Adding to a growing list of recent explorations into the Apocalypse by way of Antipodean directors and storylines, (see The Rover and the upcoming Mad Max reboot), director Zak Hilditch takes us on a journey without destination, although we inevitably, unequivocally know where we're headed...

"Wild dogs are howling, Behind the curtains..."

I am absolutely thrilled with Thom Yorke's new release. Not only is he breaking boundaries by releasing this latest solo work via bit-torrent, but the material is as experimental and far-reaching as ever. 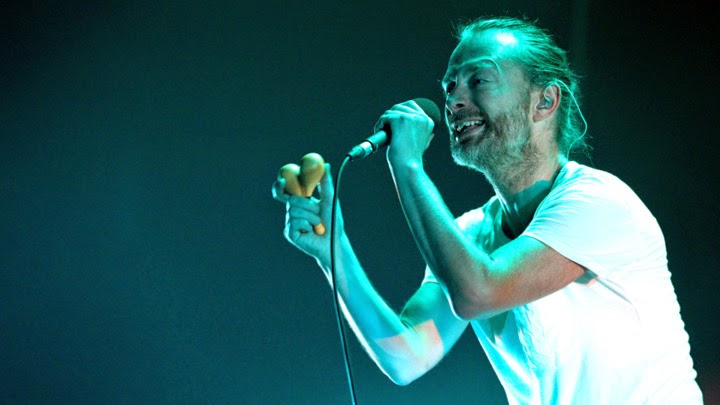 Like many of his tunes, a lot of the tracks start off sounding weird and outlandish, but those sneaky rhythms and beats eventually grow on you the more you listen in. Thom is in his own private universe and I hope he remains there, discovering new soundscapes as he spacewalks along...

Do yourself a favour and give this a listen - its the perfect antidote to a U2 force-feeding...

("The Mother Lode" in particular has got me waving my hands in the air.)

And before you buy, check out this excellent track-by-track review of 'Tomorrow's Modern Boxes' by Rolling Stone.

In a moment of weakness, and subconsciously knowing exactly what I was getting myself into, I decided to watch Pompeii... And I have come to the conclusion that a Paul W. S. Anderson movie is where all actors go to die.

You know Asylum Films - that production company that makes low budget versions of Hollywood blockbusters (eg: Atlantic Rim, and Age of Tomorrow)? This initially felt like a cheap rip-off of Gladiator, with an exploding volcano thrown in for good measure. 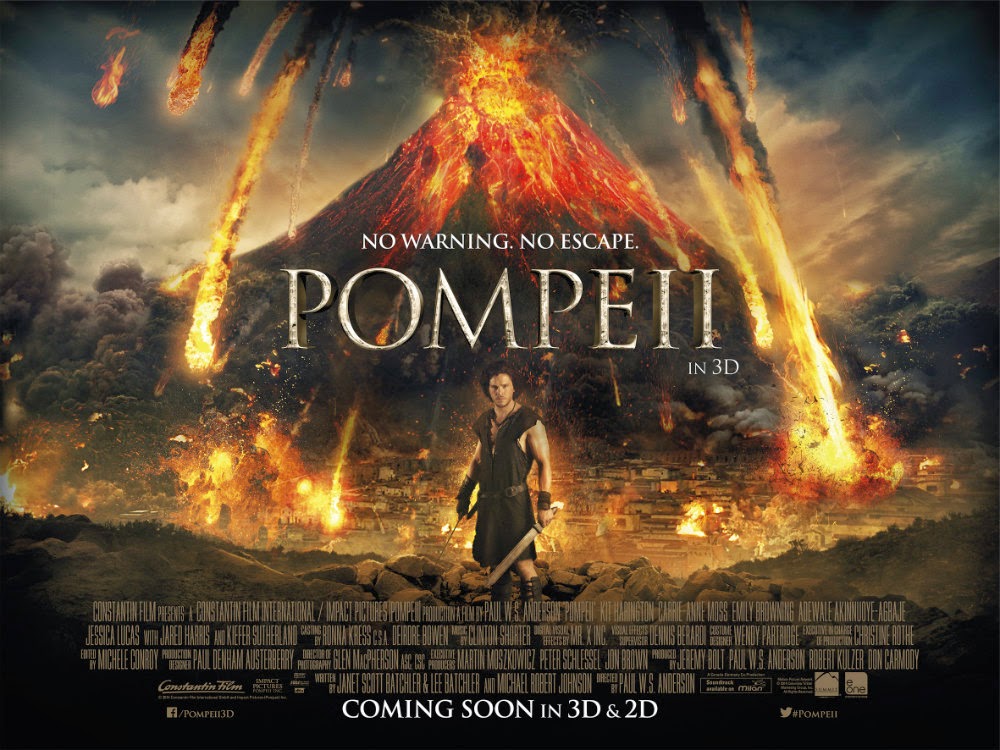 But wait, that's not all - isn't that Prof. Moriarty from Sherlock Holmes? What's he doing being mis-cast as a spineless and ineffectual Roman leader? (By the way, the actor in question is Jared Harris - son of the legendary Richard Harris, who might actually be rolling in his grave). But the greatest travesty comes from Kiefer Sutherland, who obviously needed some spare change to take this role - playing a cliched cruel and unscrupulous senator.

In fact 'Cliche' is the operative word for this movie - you've seen it all before - so don't be surprised if you watch many of the scenes with a sense of deja-vu. W. S. loves his action sequences, so the gladiatorial battles are fast and furious - and the volcanic eruptions are actually quite beautiful. And quite clever.

Unfortunately there's nothing clever about the plot - our main protagonist's upbringing and means of gaining proficient fighting skills are all glossed over. After losing his father and his tribe, obviously he's got an inherent hatred of the Romans, but hell, so did most of subjugated humanity at the time... He also conveniently falls in love with the main female lead within seconds of seeing her, prompting that old 'unrequited/forbidden love' movie chestnut. (Her mother, incidentally, is played by Trinity from The Matrix, who obviously had some time on her hands now that Neo's escapades are over).

Having said all of this, again I must say I knew what to expect, and therefore wasn't as disappointed as I might have been. In the climactic scene, as fire and brimstone rains down upon the doomed city, I dare say a few budding movie careers will also go up in flames.

Pompeii. Better than a punch in the face. Only just.

"Whatever you think is over for me, was over a long time ago..."

The Rover - an intense, disturbing piece of film-making. A study of a future that may well become inevitable...

I've always liked Guy Pearce's acting and he doesn't fail to deliver in this either. But the real surprise comes from Robert Pattinson. Forget Twilight and Harry Potter; he's almost unrecognizable as he delivers a stark, sympathetic portrayal of a desperate half-wit on the road to nowhere.

So what is it about? Well imagine if you will, a bleak outback landscape; the world after a global economic collapse. It could easily be the dawn of the Age of Mad Max. And into that landscape you drop an even more haggard version of Walter White; haunted by his past and with nothing much left to lose - except his car.

And then you team him up with a simpleton, who could easily be Jessie Pinkman but without the street smarts or the colourful vocabulary. The story unfolds as they proceed to have a very, very bad day... This is not Breaking Bad, its Badly Broken.

The future has never looked so bleak, and yet so completely plausible... 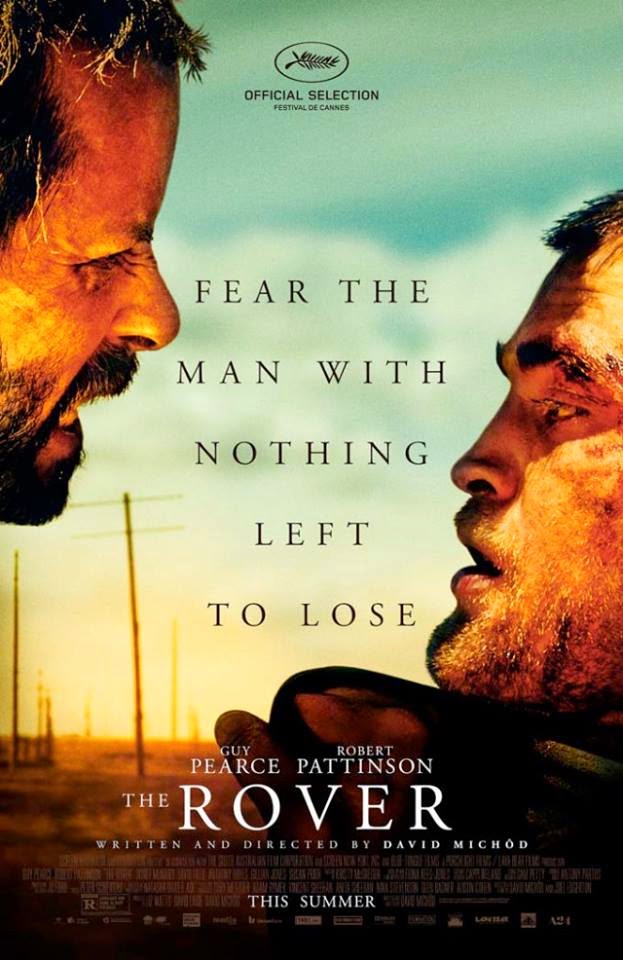